Let’s get this out of the way first: Tushy’s site copy makes me giggle like a 12-year-old.

Tushy, for the unfamiliar, sells affordable bidet attachments for your toilet. Their copy is frank, funny, and deliciously on-point. It discusses your “clean butt needs” and stresses how their product saves your ass — and the planet.

I LOVE this approach. It’s a great example of how you can turn a “taboo” product into something fun and approachable.

Tushy isn’t trying to be the Peloton of bidets. Instead, Tushy’s content appeals to a specific, bidet-curious target customer.

These folks aren’t ready to spend $700 on a toilet seat with multiple functions and voice activations. They just want to know what all the bidet fuss is about.

But let’s get to the bottom of Tushy’s SEO content success.

Yes, the articles are on-brand and conversational. Sure, I may question if the Icy Tales of Winter Poops post was the best article to create. Or if the article 69 Euphemisms for Pooping (which, yes, positions for all the key terms that you’d expect, including a position zero result) is driving revenue.

They’re fun — but many of their posts aren’t helping readers who have specific questions, like, “How to install a bidet?”

And that could be a problem.

Tushy’s more expensive competition, Bio-Bidet, positions top-10 for that long-tail phrase (and many more.) While many of Tushy’s top positioned key terms include the word [poop], Bio-Bidet’s positions are more product-relevant. For instance, [bidet attachment] and [are bidets sanitary].

Tushy’s focus on edgy, conversational content — without giving equal time to keyphrases and SEO — could be dumping their Google positions.

Having said that, Tushy partially covers their SEO content backside with well-written articles like this FAQ blog post and this “how to use a bidet” page.

(Oh, to be the model for that page, staring contemplatively in the distance.)

So, there is informational content — there’s just not much of it.

Can Tushy tweak their content in other ways? Yes. For instance:

— Many of Tushy’s product page Titles start with Tushy rather than the main keyphrase for the page [warm water bidet attachment]. I’d lead with the keyphrase (and the benefit, if possible) and leave the branding to the end.

— Although I don’t think Tushy needs to bang the reader over the head with bidet-related terms, it would be interesting to see if tightening up their keyphrase strategy would help their product pages position better. This “not positioning” issue could be why Tushy runs PPC ads for many bidet-related searches — they’re throwing money at the “not positioning organically” problem.

— Off-topic posts, such as Are You Beach Booty Ready (which is refreshingly body positive) and Earth Day Celebray! aren’t helping their content cause. They have nothing to do with bidets, they don’t answer customer questions, and the content doesn’t drive relevant traffic. Not ALL content needs to be written “for Google” — but it should still serve the bottom line.

I think Tushy can have the best of both worlds — snappy, unflinching, conversational content, and great rankings. It would mean following the search data and writing content that appeals to folks looking for bidet-specific information. That way, they could still write their “fun” blog posts…knowing that their “money” blog posts were doing the necessary heavy SEO lifting.

A more integrated SEO content strategy would allow Tushy to wipe away those sub-par positions. Sure, they could still drop the occasional quirky post — after all, that’s part of their branding. But focusing more on their SEO could help Tushy sit on top of Google’s page one throne.

Without having to pay for PPC ads.

PS – I texted my husband parts of this article, and he responded, “Wouldn’t you want Tushy to have a #2 position?” Well played, Ron. Well played.

What do you think?

Do you think Tushy’s copy has got your back (side?) Or, do you find the content too juvenile to work? Leave a comment and let me know.

The Worldwide Web Consortium (W3C), the standards body in charge of web standards such as HTML and browser privacy, announced a significant change in how it will operate. Beginning on January 2023, the W3C will become a new public-interest non-profit organization.

While many turn to Google to understand how to use HTML elements like titles, meta descriptions, and headings, the W3C created the actual specifications for how to use them.

The W3C is vital for the future of the entire web because it is developing privacy standards with stakeholders from around the world and the technology sector.

Stakeholders such as Google, Brave browser, Microsoft and others are involved in developing new standards for how browsers will handle privacy.

However, there are others with a stake in tracking users across the web via third-party trackers, who also belong to the W3C, who are trying to influence what those new privacy standards will be.

A news report (A privacy war is raging inside the W3C) on the internal W3C struggle for what the future of web privacy will resemble quoted the director of privacy for anti-tracker browser Brave stating that some members of the W3C who are contributing to the discussion are trying to water down privacy standards.

What happens to the W3C and how it evolves is important because this is the future of how the web works, including what the future of the privacy standards will be.

The W3C was founded in 1994 by Tim Berners-Lee, the Web’s inventor. The mission of the W3C is to guide the creation of open protocols and guidelines that would encourage the continued growth of the Internet, including web privacy standards.

It is currently a “hosted model,” an international standards-making body hosted in the USA, France, China and Japan.

The decision was made to transition this model to a non-profit that could more rapidly respond to the fast-changing pace of innovation on the web.

According to the official announcement:

“We need a structure where we meet at a faster pace the demands of new web capabilities and address the urgent problems of the web.

The W3C Team is small, bounded in size, and the Hosted model hinders rapid development and acquisition of skills in new fields.

We need to put governance at the center of the new organization to achieve clearer reporting, accountability, greater diversity and strategic direction, better global coordination.

A Board of Directors will be elected with W3C Member majority.

It will include seats that reflect the multi-stakeholder goals of the Web Consortium.

We anticipate to continue joint work with today’s Hosts in a mutually beneficial partnership.”

Transition to a New Legal Entity

Although the W3C is transitioning to a new structure, the announcement sought to assure the public that current decision-making processes will remain the same.

“The proven standards development process must and will be preserved.”

While they state that the development and decision-making processes will remain the same, the reason for transitioning to a non-profit organization is to enable the W3C to “grow” beyond the original structure since its founding in 1994 for developing web standards for the early web and to “mature” in order to meet the needs of the future better.

The reason for the change was explained in the context of evolution and growth:

“As W3C was created to address the needs of the early web, our evolution to a public-interest non-profit is not just to continue our community effort, but to mature and grow to meet the needs of the web of the future.”

“Grow” means to change, and “mature” means to reach the next stage of change. It’s awkward to reconcile the concepts of change and maturation with the idea of remaining precisely the same.

How can the W3C expect to grow and change to meet future challenges while simultaneously remaining the same?

The W3C claims that the decision-making processes will remain exactly the same:

“Our standards work will still be accomplished in the open, under the W3C Process Document and royalty-free W3C Patent Policy, with input from the broader community. Decisions will still be taken by consensus. Technical direction and Recommendations will continue to require review by W3C Members – large and small.”

While the announcement downplays the changes as just being a change to the “shell” around the W3C, it also states how it operates will evolve and grow.

Fortunately, as long as the W3C conducts all of its business in the open, and nothing is decided except by consensus by all the stakeholders, transparency should help guarantee fairness in the decisions made, regardless of how much the W3C changes (while remaining the same).


Here is a recap of what happened in the search forums today, through the eyes of the Search Engine Roundtable and other search forums on the web.


Google said they communicate more often about algorithmic updates, not less. Google is testing snippets that expand to show more local intent information. Google product grid results are organic, not ads. Google is testing shaded background colors for shopping ads. Would you hire an SEO who doesn’t know the difference between crawling, indexing, rendering or ranking?

We’ve been seeing a lot of grid-like formats with products and shopping results. We know some are ads and some are organic. John Mueller of Google just added official Google representative confirmation that many of these are organic – if you don’t trust that there is no ad label on them as evidence enough.

The other day, Dan Shure posted on Twitter this screenshot (click it to enlarge) of this grid product format and said “This is quite the search result page – there are up to SIXTEEN products below a SINGLE organic listing (in addition to the image carousels) and desktop is infinite scroll.” 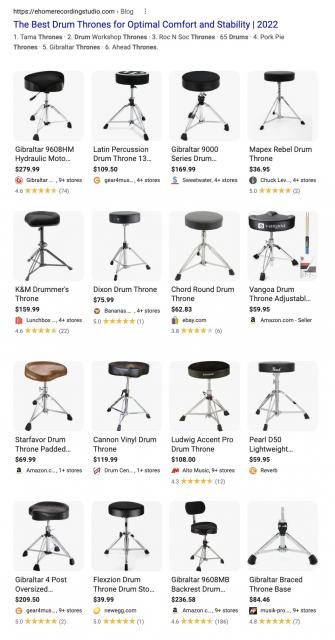 Well, yea, these are organic. John responded on Twitter saying “They’re organic results too. This is one of the reasons it’s good to dig into our ecommerce site guidance if you sell products.”

They’re organic results too. This is one of the reasons it’s good to dig into our ecommerce site guidance if you sell products :). https://t.co/dUWxZmCDOq & https://t.co/U0FPRkmO3m

Honestly, like I said before, I am not a huge fan of these grid formatted results for products. At least, they should be in some “click to expand” feature so you can see more. So show one line of these results with a click to expand. It is just too much in my opinion, even if Google is confident of the intent of the query.

Also, not all of these image snippets need markup to work, although these with the pricing and reviews probably do…

Work smarter, not harder, to give customers what they want

In-House vs Outsourcing Marketing: The Ins and Outs